This article first takes a look at Siddhartha Guatama, and how he became to be known as the “Budha”, the Enlightened One. Then we look at the basic beliefs and practices of Buddhism.

Around the year 563 B.C.E. in what is now Nepal, Siddhartha Guatama of the Sakyas was born the Prince of a small kingdom near the Indian border. More than twenty five hundred years later, the birth of Siddhartha Guatama is shrouded in mystery and legend. It is said that the worlds were flooded with light at his birth. That the blind so longed for a glimpse of him that they were given sight. At his birth, the deaf and mute are said to have conversed in ecstasy of what was to come. Wild animals were quiet and still. The fires of hell were quenched and prisoners freed from their chains. Only Mara, the Evil One, did not rejoice.

Historically, what is known of Siddhartha Guatama is that he was affluent, exceedingly handsome and, as the son of a King, destined for fame and power. Upon his birth, Siddhartha Guatama’s father summoned fortunetellers to learn what was in store for his son and heir. The King was told by the fortunetellers that his child was no ordinary boy. There would be two different yet distinct paths before this child and the choice he made would have a profound impact on the world. If the young Prince chose to remain with the world, he would become a great conquerer and unify India. He would
become a Chakra-vartin , the first Universal King. If he chose instead to abandon worldly desires, he would become not a conquerer but a world redeemer. Faced with this option, the King made every attempt to keep his heir attached to the world.

At sixteen Siddhartha Guatama was married to Yasodhara, a Princess from a neighboring kingdom, who bore him a son called Rahula. Later in life, the man Siddhartha Guatama would become, the man who ate whatever food was placed in his begging bowl, would describe his luxurious upbringing, “I wore garments of silk and my attendants held a white umbrella over me. My unguents [ointments] were always from Banaras.” Three palaces and 40,000 dancing girls were at his disposal. Strict orders were given to shield the young Prince from any ugliness or suffering. However, in his twenties, despite his wealth and ease in life, Siddhartha Guatama fell into an ever
increasing depression that would lead him to break with his worldly estate
forever.

As the story goes, Siddhartha’s depression began with the Four Passing Sights.

Siddhartha’s carriage one day passed by an old man who had been
overlooked by the guards whose job it was to clear his path of undesirables. Shielded his whole life from any sight of the ravages of old age, suffering, illness, and death the sight of this gray haired old man, back crocked and bent, his teeth broken and rotted, stunned the Prince. Although the King demanded the guards insure an even wider perimeter around his son, on his next carriage ride, the Prince encountered a man lying by the side of the road, his body racked by disease. On his third journey, Siddhartha Guatama caught sight of a decomposing human corpse. On his next journey, now fully aware of the reality of the human condition, Siddhartha saw from his carriage a shaven head monk, wearing ochre colored robes, begging bowl in
hand. It is this final sight that makes Siddhartha Guatama aware of a life lived outside the world. He no longer found any peace or satisfaction in his palace, or in the beautiful gardens that surrounded him. The dancing girls and feasts were an irritant and a distraction from his thoughts. He began to despair of ever finding real fulfillment on the physical plane if disease and death were truly inevitable. “Life is subject to age and death. Where is the realm of life in which there is neither age nor death?” Siddhartha Guatama was twenty nine when he went to his wife’s bed chamber in the middle of the night and kissed her and their son good bye as they slept.

Traveling with a palace guard he headed for the forrest arriving just after daybreak. There the Prince traded clothes with the guard who then returned to the palace to break the news. He then shaved his head and walked into the forrest on his Great Going Forth. Siddhartha Guatama of the Sakyas left the world behind.

Guatama’s first step was to seek out two of the foremost Hindu masters and learn all he could from them. He learned a great deal about raja yoga (designed to suit those of a scientific nature raja yoga is The Way to God through Psychophysical Exercises.) and Hindu philosophy as well. Although he was in agreement with much of the Hindu teachings, Guatama was opposed to the traditions reliance on ritual and supernatural Gods and Goddess. Guatama also found the brahmins (priests) abused their power and did nothing to assist the spiritual growth of the Hindu people. 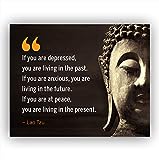 (as of January 24, 2023 22:41 GMT +00:00 - More infoProduct prices and availability are accurate as of the date/time indicated and are subject to change. Any price and availability information displayed on [relevant Amazon Site(s), as applicable] at the time of purchase will apply to the purchase of this product.)